As lawyers for a deaf student and the school district that has barred his service dog from class continued battling in court, state human rights officials said Wednesday that the district may be guilty of discrimination. 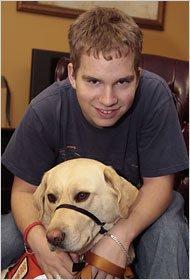 As lawyers for a deaf student and the school district that has barred his service dog from class continued battling in court, state human rights officials said Wednesday that the district may be guilty of discrimination.

The state Division of Human Rights said the East Meadow School District was involved in “unlawful, discriminatory practices” against several students who use assistance dogs, including John Cave Jr., 14, the deaf Westbury boy whose family is suing to force the district to let the boy’s dog into school.

The agency, in a statement, said school district officials were “not open to settlement.” A hearing will be scheduled on the matter, the agency said.

East Meadow Superintendent Robert Dillon said he had not seen the complaint and could not comment.

District officials say Cave has full access to school without the dog and that the canine would cause health and safety problems for staff and students.

Cave’s family says Simba is losing his effectiveness as a service dog because he is away from the student, who uses cochlear implants to hear, for at least six hours a day.

The family has sued the district in federal court for $150 million.

Witnesses Wednesday testified in federal court in Central Islip about Cave’s hearing abilities and the possibility that Simba may cause health problems for students and teachers.

Jennifer Ledbetter, an audiologist who tested Cave yesterday morning, said the teen misses 20 to 30 percent of sounds when he uses his implants.

Dr. John Rooney, a Wantagh allergist, said asthma sufferers may have their allergies aggravated by exposure to a dog. He said 21/2 to 5 percent of Americans are allergic to dogs.

“The dog is in this room and seems not to have bothered anyone so far,” Spatt said. “What is the harm of this boy bringing the dog (to school)?”

The courthouse was ordered evacuated at 4 p.m. because of the weather, but Spatt defied the order when attorneys said their witnesses could not return to court on Thursday.

After more than an hour of testimony, Spatt adjourned the case until Thursday morning and sent everyone home.

“I’m not going to endanger my staff,” he said.

When school district attorneys said Rooney had patients to see today, Spatt ordered him to return to court Thursday morning.

“You’re going to have to tell your patients to wait,” Spatt said.