Despite his hard-nosed day job, Mr. Margiotta, who moonlights in civil litigation (his translation: “Anyone who’s suing anyone, but not ambulance-chasing”) in his private practice in Lindenhurst, tends to be just that: merry. Even when discussing the plight of his furry blond client, Simba, the service dog who received national attention after the Westbury family that owns him filed a $150 million lawsuit against their hearing-impaired son’s school district in East Meadow for banning Simba from the premises.

The Dog Just Wants to Help. So Does He. 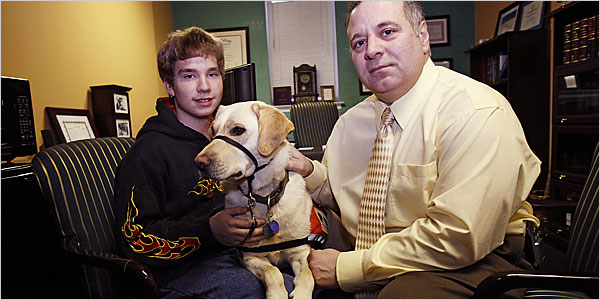 The only dog in Paul J. Margiotta’s office at Babylon Town Hall, where he is a deputy town attorney/special prosecutor authorized to deploy attack-dog ferocity against town code violators (illegal dwellings and debris-filled yards are a quality-of-life crime epidemic here), is a Snoopy ornament bearing the message, “License to Be Merry.”

Despite his hard-nosed day job, Mr. Margiotta, who moonlights in civil litigation (his translation: “Anyone who’s suing anyone, but not ambulance-chasing”) in his private practice in Lindenhurst, tends to be just that: merry. Even when discussing the plight of his furry blond client, Simba, the service dog who received national attention after the Westbury family that owns him filed a $150 million lawsuit against their hearing-impaired son’s school district in East Meadow for banning Simba from the premises.

The lawsuit claims that the dog’s service skills will diminish if he can’t attend school with his teenage master and that the Americans With Disabilities Act entitles all people with disabilities, including the hearing-impaired, to choose whatever tool assists them in independence.

Not surprisingly, the Simba suit represents the first time Mr. Margiotta, a later-in-life convert to lawyerdom — he received his Touro Law School diploma in 2003, at age 40 — has had a dog as a client. More to the point, it marks the first time Mr. Margiotta solicited a client: as the adoptive single parent of a disabled son, he was so steamed when he read about Simba, he took the case free.

So far, he says, it has cost him around $6,000; if, as he anticipates, the dispute makes it to the State Court of Appeals in Albany, he estimates his out-of-pocket costs at more than $15,000. He says he came up with $150 million for compensatory and punitive damages: “No. 1, to punish the school, and No. 2, to get attention. Nobody would notice if we’d sued for $5,000. I want to make sure that it is never cost-effective to violate someone’s rights.”

Here’s his mantra: “Sometimes when it doesn’t make the right kind of sense to go by the letter of the law, you need to go by the spirit of the law.” A Town of Islip Republican hired on the strength of his “aggressive personality” by the Democrat-run Town of Babylon, Mr. Margiotta gleans his professional credo from the town supervisor, Steven Bellone. “He told me when he hired me that when a situation comes up that’s not a regular situation, I should use my own judgment and do the right thing,” Mr. Margiotta says.

Enter Simba the yellow Labrador retriever, a dog so eager to be a helpmate and so compliant about following orders that when on duty he alerts his master, John Cave Jr., to every important sound, from fire alarms to fast-approaching vehicles to voices calling his master’s name. That’s mind-blowing, says Mr. Margiotta, whose own dogs, itsy-bitsy alpha types, tend to boss him around. In his opinion, helping Simba help a hearing-impaired ninth-grader pursue independence is the right thing, even if hearing dogs in public schools tend to be the exception, not the rule.

Mr. Margiotta jokes that neither he nor Simba is litigious, merely dogged in the conviction that Simba belongs in school and that his training skills, which cost $20,000, will atrophy if he is left at home to mingle with three relatively unskilled family pets: two mutts and a cat.

Sheila O’Brien, executive director of Neads/Dogs for Deaf and Disabled Americans, the Massachusetts group that supplied Simba, said Simba’s training might stall, if not regress, if he is off duty more than he is on duty. And if dog hours are like dog years, yipes, each schoolday represents 42 hours of solitary confinement in his crate, where he is sequestered when John’s parents leave for work.

Judge Spatt, despite citing Simba’s impeccable courtroom behavior — not a peep out of him — turned Simba down, noting the school district’s efforts to accommodate John in other ways. John cried, then authorized an appeal.

“Where I think the school is wrong and the judge is wrong is that they’re not seeing John as an individual with a disability, they see him only as a student with a disability,” Mr. Margiotta says. “Simba is an independent life tool, not an education tool.

“They’re deciding what a disabled person’s tool will be, like telling a blind person to use a cane instead of a dog. My opinion is, they should thank God they aren’t disabled and let him have anything that makes his lot in life better.”

Simba’s reaction to the ruling has been to whine at the front door when John leaves for school. Mr. Margiotta, who considers himself empathetic to a fault, worries that Simba is depressed.

Mr. Margiotta has two pets: Beauty the Pomeranian and Fawna the Chihuahua, the antithesis of service dogs. “They alert me to whatever they want,” he says. No wonder he relates to Simba.